The new year got off to a fast start with the restoration of the power-sharing Northern Ireland Assembly, successful U.K. and E.U. Brexit votes, and announced Feb. 8 elections in the Republic of Ireland.

In the North, the Assembly’s three-year dormancy has laid bare “a state of deep crisis across the territory’s neglected public and political institutions,” The New York Times reported Jan. 22. Residents “wonder whether and how the regional government will be able to overhaul public services like health and education that have declined to the point of near collapse.”

Brexit Day is Jan. 31. Britain and the E.U. approved the separation and now begin negotiating a trade deal. Prospect, a U.K. publication, speculates on How Northern Ireland could use Brexit to its advantage.

With less than 10 days before elections in the Republic, polls show that Taoiseach Leo Varadkar’s Fine Gael party has fallen 7 percentage points to 23 percent since November, while rival Fianna Fail is up 2 points to 26 percent, according to a Jan. 26 roundup by Reuters. Sinn Fein was up 8 points to 19 percent and may play a role in deciding the eventual coalition government. Visit The Irish Times‘ “Inside Politics” podcast.

O’Brien is listed by the Clinton Foundation as having made $10 million to $25 million in donations to the charity as of June 2016, The Irish Independent reports. The Irish government is also listed as fifth among 19 nations that have donated to the Foundation, contributing in the range of $5 million to $10 million. 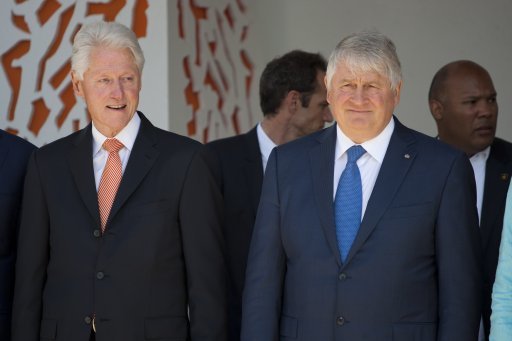 “This attack may not be deliberate Trump payback for overt political assaults on him by senior politicians in the Dáil this year, but it should be enough to worry Irish voters,” Colum Kenny writes in The Irish Times. “With the E.U. going after tax breaks for U.S. jobs here, we do not need a pissed-off president in the White House.”

Here’s the email the Trump campaign sent to reporters, which quotes extensively from Irish and U.S. media reports.

The Irish Times reports that Clinton, as Secretary of State in 2009, passed on participating in a panel discussion about the North after first saying it was “a good idea.” The panel was being hosted by the Clinton Global Initiative, the family foundation she runs with her husband, the former president, and daughter. It was to feature Irish and Northern Irish officials. Clinton bowed out of the event after an aide suggested her appearance might be perceived as a conflict.

Clinton used a private account during her State Department tenure to shield her email from public record requests. A U.S. judge ordered the State Department to release the emails in batches every 30 days until all 55,000 pages she gave to the agency in December are released.

One other note on U.S.-Irish relations: Speaker of the U.S. House of Representatives John Boehner met with Taoiseach Enda Kenny. They discussed the Irish economic recovery, immigration reform including the plight of the undocumented Irish in the U.S., and the situation in the North, according to the Times.

Boehner was accompanied to Dublin by seven members of Congress.